Meditation Words and Their Meanings 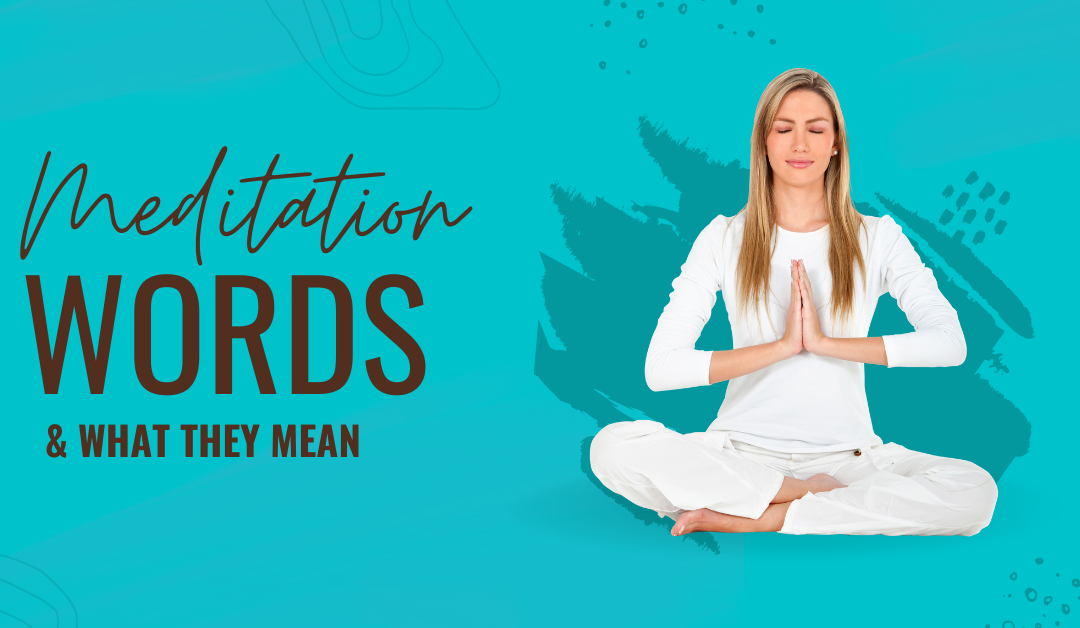 Meditation has become a universal practice. If you, like many others, have gained an interest in meditation and are learning more about it, there’s a good chance that you’ve come across words or terms you don’t understand.

In this guide, we hope to bring some clarity by defining some of the most common meditation words.

Many people recite mantras when they meditate. These meditation words can serve a variety of purposes. They can help you stay focused, making it easier to get into a meditative state. They can also be used to promote relaxation, alleviate stress and cultivate a more positive mindset.

Here are some example mantras:

These are just a few of the many mantras used in meditation.

When practicing mindfulness meditation, you may come across several terms that you are unfamiliar with, including:

Refers to the hindrances that can prevent you from reaching enlightenment or nirvana. They include:

The six senses in which the mind is aware of to make sense of the world. These include:

The practice of mindful breathing in and out. Ana pana means “in-out” and sati means “mindfulness.”

The essence of the Buddha’s teachings. These are four things that the noble or enlightened ones understand.

Refers to the unification of attention; a state of intense concentration.

These are the four foundations of mindfulness:

There are many Buddhist meditation chant words and phrases, which include (but are not limited to):

Meaning: I honor the blessed one, who is fully enlightened and the only one.

A mantra that pays homage to Buddha to help them perform good deeds and gain enlightenment.

Meaning: Devotion of our mind and body.

A powerful mantra that encourages us to surrender ourselves to divine power. It can be used to give us the strength to face challenges.

Meaning: Honors White Tara, which is depicted as having seven eyes and sitting cross-legged.

White Tara is associated with long life, and this chant is often recited with a certain person in mind.

This chant is also known as the “Heart Sutra,” and it is recited to help the practitioner gain clarity in their spiritual life.

There are many terms or phrases related to meditation that either describe different practices or outcomes and effects of the practice. Some of the most common meditation words in this category are:

A silent mantra meditation promoted by the Transcendental Meditation movement. The practice is believed to create a relaxed state of awareness and reduce stress to reach a higher state of consciousness.

This form of meditation is practiced for 15-20 minutes twice per day. It is amongst the most widely practiced and widely researched forms of meditation.

Refers to the state of being awake and aware of your surroundings.

The path to nirvana, or enlightenment. The eightfold path includes right:

The practice of engaging the mind. In meditation, the goal is to empty and clear the mind. Reflection is all about thinking about challenges, goals, decisions and life experiences.

A school of Mahayana Buddhism that focuses on the attainment of enlightenment. Those who follow this school practice the zazen meditation technique, and it requires the help of an accomplished and experienced teacher.

To attain full awakening; to reach nirvana and become a Buddha.

Refers to the seven energy points on the body. The word “chakra” itself translates to wheel or cycle. There are seven chakras that run along the spine and affect areas of your health, behavior and mental health.

Sometimes called cosmic law and regarded as right behavior. Dharma is a universal truth that is common to all individuals.

Refers to the “coiled” energy that sits at the base of your spine. Meditation can help awaken and release kundalini energy.

Mantras are words or phrases chanted and focused on during meditation. They may be said out loud or internally.

Refers to the hand positions used in meditation. There are a variety of mudras, and each one has its own meaning.

It is said that a person achieves nirvana when their mind is at peace and impervious to worldly temptations. Nirvana is sometimes referred to as enlightenment.

Refers to the energy field surrounding a person. Auras are typically perceived as colors. Common interpretations of these colors are:

There are many terms used when talking about meditation, including:

In meditation, breath control is often referred to as breath work. It can involve a variety of breathing techniques, including deep breathing, pranayama, circular breathing and more.

A common term used in meditation refers to a string of 108 beads. These beads are used by Buddhist monks in meditation and chanting. A mantra is recited for each bead.

A meditation method that uses light signals to help you stay focused and attentive.

The practice of concentrating your mind on a single point and maintaining your concentration for as long as possible. Dharana can help improve your focus.

A meditative practice known as “yogic gazing.” The practice involves focusing on an object and trying to visualize it with your eyes closed.

A breathing meditation technique (pranayama) that involves restricting your breathing after partially covering your eyes, ears and nose with your fingers. Bhramari is a popular technique that is known for its healing effects.

Rene is a creative, little gnome. When she’s not diving deep into research on health and wellness, she’s spending here time out in nature, growing her homestead, photographing wildlife, doing yoga or enjoying a zen (depending on the day) moment with her fur babies. And on top of all of that, she’s a professional writer by day, helping businesses around the world grow.